This is a popular Dual Sport event just over the border in Wisconsin.  Check it out!

I have no topics for this Thursday’s conference call.  Anyone else?  Otherwise I may cancel it.

Chime in with comments to this post and I will be happy to add them to the agenda.

“MichaelR” over on Twin Cities Dual Sport yahoo group wrote up a nice trip report from a recent ride on the TMAT East.  He even used the new Dual Sport Maps Android app as a GPS.  He also has included some valuable info regarding trail damage.  Here is the report:

“We left a little later than anticipated on Friday morning, and hit the dirt at May Ave and 120th St. I had the map loaded on my Barnes and Noble Nook(Rooted, Gingerbread)in the Dual Sport Maps application and was feeding the GPS coordinates from my phone using Tether GPS and an Ad Hoc Wifi network on the bike.

It was really nice to have the huge 7″ screen on the nook for a GPS. I put it in my tank bag, and the touch screen worked through my map window, with my gloves on. I had a few app crashes until I stopped auto-rotating the map. Then things worked great. I have to say, mindlessly following ‘the line’ while being able to enjoy the scenery is the way to go. My fall back plan was printed, turn by turn directions, but I also had DSM on my phone, and an eTrex legend along.

The ride was relatively uneventful until we got north of Sunrise. May Ave is really nice, winding dirt road with a lot of trees and road side lakes. It’s paved into and out of Scandia, until you get back on the dirt a few miles north. Outside of Sunrise, we hit another paved section. The road was closed. A quick review of the map showed quite a detour, so with the blessing of the workers who had the road dug up, we rode down into the construction ditch and back up the other side.

Once we got back into the dirt, it pretty much stayed that way all the way to Hinckley with only a short paved section in Pine City to cross the Snake River.

Out of Hinckley, you take 48 out to St. Croix State Forest. It is still closed. We pulled into the first parking lot at Grace’s Lake so Deb could see the same devastation that turned Paul Streeter and me back on 7/4. There was a bit of the state trail cleared, but they really haven’t done much. There were commercial crews clearing huge fields of downed ‘money trees’, but no sign of the DNR folks clearing trail.

We got back on the highway and picked up the Gandy Dancer at Markville. 50 yards down the trail, we had to get back on the access road, as there were way too many trees down on the GDT. We kept an eye out for clear trail so we could get back on, but ended up on the access road (Belden)all the way to it’s end. We were still about 6.5 miles short of the turn into Nemadji. We pushed on, crossing over and under blowdowns, and managed to get within a mile of the turn before there was just no going over, under, or around. We had to turn back and ride 8 miles to get back to Rash Lake Rd. We could have taken the Moose Junction road to 35 in WI and gone up to Foxboro, but the trail was well under water, and I didn’t have cheese land maps loaded.

We ended up taking Rash Lake Rd out to Trails End, then into Kerrick for a nice 1.5 hour detour. The fast forest road was fun, and there were paths for forest trucks cleared through the few blowdowns we saw.

We stopped in Duquette for Ice Cream. After being there so many times on the dirt bike, it was strange to have ridden there from home instead Gafvert camp ground. We picked up the TMAT just out of Nickerson and continued north.

It was pretty much all farm field dirt roads to 210. Then we went into Carlton and Thomson. Wow! The Outpost (U of M Paddling Center) at Thomson Reservoir was incredible. We stopped for a good 45 minuted and crawled around under the bridge over the rapids. Jay Cooke State Park is beautiful and the paved twisties were a real treat. We popped out on 23(the quick way to Duluth from Nemadji,) and rode by the turnoff to Superior, and through New Duluth. A left on Becks Rd took us to West Skyline Parkway and up we climbed. The ‘Road Closed’ sign stopped me for… Actually, it didn’t stop me at all. I motored right through. Automobile traffic signs don’t apply to Dual Sports.

The view from Skyline was incredible. Definitely one of the highlights of the trip. We were staying out by the Airport, so we got off the trail and went to our hotel.

The next day we had a Scenic Boat Tour to take. It started raining. The tour was informational, but had I known what it was going to be, I would have opted to ride out earlier and beat the storm. We got back on the bikes in the rain, and rode to Aerostich. Not even the downpour could pry the cost of a Roadcrafter suit out of my wallet, even with a $200 discount. Deb forbid me to get the “Wherever there is sin, that’s where I must go” shirt, so I’ll have to mail order one. I did get the ‘Unsupported motorcycle travel for Terminal Cases’ book free for stopping in, though.

We decided to forego the TMAT on the way to Two Harbors. The WR was still shod with OEM ‘DeathWings’and we had no idea if we would find mud. We took the shoreline drive and arrived safe and soggy in Two Harbors.

One of the people we were staying with went over the route we were going to take from Two Harbors, and indicated that it was all paved, though Hay fields. It was probably better to have taken the shoreline anyway, since we didn’t need to jog over to the west to stay on the trail going further north.

We took 61,23,123 home with a stretch back on the TMAT from Hinckley to Pine City. By that time, we both understood why Corbin saddles cost so much, so we hopped on 61 for the speedy ride back and off the saddles. All in all, a very successful trip and we’re looking forward to the next one. Does anyone have a Corbin they want to sell for a KLR?” 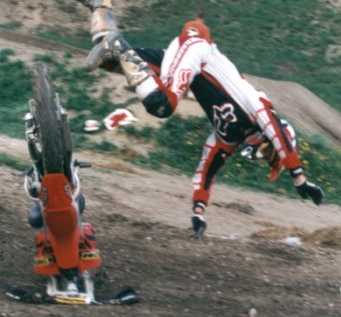 We have all been there at one time or another….stuck.  Whether it is a crash, or a flat, or a bike that won’t start it is never fun.  So Minnesota rider “Get_Bent” started the “Emergency Help Me” system earlier this year.  Since so many riders carry smart phones with them now, this system allows any rider to email their location and phone number to a network of other riders in the state.  The hope is that someone else is online, listening, and willing to come help.  This isn’t a replacement for 911, or even good motorcycle insurance, but it is a creative way to get yourself out of a jam when no other options present themselves.  For more info hop on over to ADVrider.

Join Spot and GearJunkie on a Treasure Hunt in Minnesota! 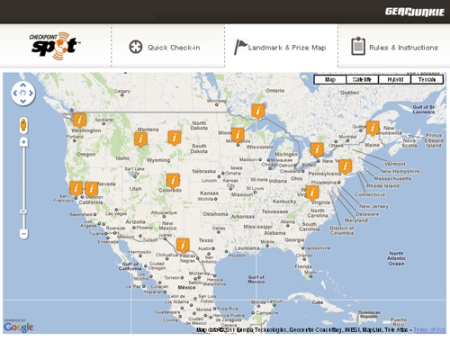 Spot LLC (that cool company that make the little GPS tracking devices) and GearJunkie blog (started by a local Minnesotan) invite you to join them on a treasure hunt across the country.  you will find two hidden locations in Minnesota (one near Minneapolis and one near the North Shore/BWCA.  Ride to the location, check in with your Spot device and you get a chance to win free gear. Cool!  Spot page for more info is here.

Enduro X in the X Games

Enduro Cross is in the X Games this year. Don’t have ESPN?  Missed this weekend’s action?  Don’t worry.  ESPN3.com has the replay. Now, I don’t entirely understand who can and can’t stream the video.  It seems that it depends on your internet provider.  But follow this link: http://espn.go.com/espn3/index# .  Click on Replay, scroll to Sunday July 31st at 7Pm and click on the X games 17 link.  About 2:17:00 into the video the Enduro Cross starts.  Enjoy!  (Here is another link if the first doesn’t work: http://espn.go.com/espn3/player?id=203342&league=XGames )

Most impressive event.  The rock corners and 3 foot thick logs are just amazing.  I believe at least one rider was on an AWD KTM. The 3rd heat was the messiest and most entertaining.